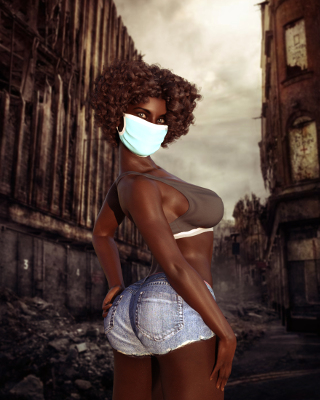 Although this was by no means the first time in her life that Lindiwe had been ill, she’d never before felt as desperately sick as she was now. Her luck had run out. The Buffalo Pox that had spread across England as it had the rest of Europe, Africa and Asia had finally chased her down. The horrible boils of pus on her face and chest could never be symptoms of anything else. And here she was, still living in the same Redhill squat which had been her home for almost a year with only hard floorboards on which to sleep.

As a result of the fever and pain from which she suffered, all Lindiwe could do was shiver and sweat in the corner of the room swaddled in a blanket with her consciousness lapsing periodically into blessed oblivion. She needed food and drink, but didn’t have the energy to leave the small spot in the room that she’d claimed as her own and venture out to beg on the mean streets of North Surrey. In any case, she wasn’t sure she even had the ability to hold anything in her stomach once she’d let it slip down her throat.

It was obvious that Lindiwe was sick. She sat huddled against the mildewed wall displaying the typical symptoms of Buffalo Pox such as horrible festering sores and postulating boils. This was reason enough for anyone to keep their distance. Any contact with Lindiwe or with anything she touched could easily spread further a plague that had already claimed so many lives across the world

Lindiwe was sure that there had once been a time when pandemics of this kind were countered with an antidote that would later be released to the public. Such days were gone and these days many new strains of cholera, diphtheria, typhoid, hepatitis and leprosy had taken a fresh hold on those least well prepared to defend themselves against it. The limits to a pandemic’s range wasn’t determined only by the spread of poverty and access to medicine. It was spreading much further as scientific progress was no longer keeping ahead of the pathogens’ rapid mutation. This was England’s second great epidemic in just over ten years, but the first Lindiwe had known since she’d arrived in the Kingdom. It was ironic that although she’d managed to avoid the many truly horrible diseases that had ravaged Lesotho and neighbouring South Africa it was in England that Lindiwe was finally laid low.

The English had almost certainly learnt lessons from the last plague, still known as the White Death, but that knowledge was compromised by the fact that it had happened during the period of the Government of National Unity whose one redeeming feature was its natural instinct for prompt authoritarian action. The government could be congratulated for having put into place a truly radical response: in which England’s borders were hermetically sealed, internal movement regulated and vast areas of Southern England, the Midlands and the Home Counties quarantined, but such praise was compromised by the fact that such policies were the knee-jerk response of an insular, almost racist, government very much in the pocket of big business. Nothing was considered more precious or sacrosanct than the welfare of those least likely to suffer, so the hundreds of thousands of deaths directly or indirectly attributable to Sheep Fever were overwhelmingly concentrated amongst the already poor and vulnerable. No loss, the government probably thought. Such people would never vote for them even if they had the opportunity to do so.

Buffalo Pox’s spread across England followed a different pattern to that of the White Death. This may have been because the current coalition government of Labour, Green and other left-of-centre parties made a huge effort to differentiate itself from its discredited predecessor. Nevertheless, although the contagion was distributed more evenly across the socio-economic classes and ethnic groups, there were still many tens of thousands who’d died and many more who were likely to die in the future.

And Lindiwe was convinced that she would soon be one of them.

Like everyone else, Lindiwe had followed the disease’s progress with alarm as it emerged from the recently re-opened Channel Tunnel and the southern ports; then spread through the counties of Sussex and Kent; and now to the very edge of London. Why was this contagion known as Buffalo Pox? Why not smallpox or even cowpox? Its flimsy connection with buffalos was more to do with Water Buffalo rather than the species of Bison locally known as Buffalo by the citizens of North America’s fragmented nations. The disease’s origin was more the kind of place where such buffalo wallowed rather than the animals themselves.

Such concerns were of little comfort to Lindiwe now; although her thoughts were so fragmentary and unconnected that anything so abstract was a kind of comfort to her. She was also sometimes aware of the presence of the two other African women who shared her bedroom and with whom, until she became ill, she’d huddle together for warmth and company under the threadbare blankets.

There was Uzoma: a large woman now unnaturally diminished by hunger and from whose bosom and buttocks protruded more bone than flesh. Her fluency of English was poor and her knowledge of any other language that Lindiwe understood was non-existent, so she mostly communicated by hand-signals and a severely limited repertoire of words. Lindiwe still didn’t know from which African country Uzoma was a refugee.

There was also Yewande whose original home was Serrekunda in the Gambia, now a province of Senegal. Her English was excellent as was the quality of her education, but there were few job opportunities for a Historian in Comparative Linguistics. She now made a living in one of the many sweatshops that lined the London-Brighton Road. She was by far the best dressed woman in the house—resplendent in the tee-shirts and football sweaters that her employers sold—but she was also generous in helping to stock the place with household provisions.

Although her two room-mates kept a prudent distance from her, it was only because of them that Lindiwe was still alive. They slept as far from her as they could on the other side of the room, their fully clothed bodies wrapped round each other for warmth. When either woman ventured in her vicinity, she would keep her mouth covered as protection from air-borne viruses. Neither woman was expert in medicine, but both knew enough not to touch Lindiwe or anything that she’d worn, touched or coughed on. And it was they who ensured that Lindiwe was provided with the food and water that she was physically incapable of fetching for herself.

The outcome of Lindiwe’s battle against near death was by no means certain. The days were long and feverish and Lindiwe was almost always surprised when after she’d fallen asleep she would awaken the following day. Was she getting better? She wasn’t sure at first. The moments when she thought she might be recovering, when a boil had retreated or the phlegm she coughed up was less viscous or tasted less revolting, was often followed by a fresh outbreak of debilitating fever whose affects couldn’t be relieved by the water that Uzoma or Yewande had left in an old plastic bottle beside her.

All the same, Lindiwe was convinced that a corner had been turned when she was at last able to concentrate with more attention to Yewande’s unbroken monologues on those few moments when she wasn’t working or sleeping. (Uzoma’s similar monologues served only to dull her senses to welcome sleep). The Buffalo Pox had cut a swath across the Kingdom and decimated farming communities as far afield as Cornwall, Cumbria and Suffolk. It was now retreating from its original strongholds in the South East of England and the capital had mostly escaped the worst of it.

“Good!” said Lindiwe bitterly. “So, I’m nothing but a freak statistic.”

“Not just a statistic, Lindi sweetheart,” said Yewande who was delighted and encouraged by Lindiwe’s comments although they were scarcely cheerful. “You’re alive, remember. And you might not become a statistic at all.”

A day or so later, Lindiwe had recovered enough to be able to watch the television news on Yewande’s laptop screen (or for as long as its battery power lasted). This was a privilege that Lindiwe truly appreciated. The cost of powering batteries was especially prohibitive in winter when there was so little solar energy. She watched the EBC News constantly on the small 25 centimetre screen as it continually recycled the same news stories hour on hour on a diminished budget and with most outside images provided on license by Sky News UK and foreign broadcasters from Scotland and Ireland. It was the same depressing cycle of famine, plague, warfare and economic malaise, but more than anything else it helped distract and even cheer Lindiwe. It was comforting to know that however bad things were for her, it was many times worse elsewhere. The Buffalo Pox and the series of other plagues and contagions that had spread across the world had been so severe in some countries that global population growth, including in even Africa, was actually faltering in its otherwise inexorable climb. When the sources of disaster weren’t the familiar four horsemen of the apocalypse, there were other ills to trouble the world. Earthquake. Crop failure. Drought. Flood. Aeroplane crashes. Border skirmishes between the fragments of what had once been the United States. Even some ominous sabre-rattling in the Middle East. It all put Lindiwe’s near death from an international pandemic into some kind of perspective.

Soon Lindiwe was well enough that she could stand, walk, talk and even contemplate re-entering the land of the living. But was she now able to make a living? She didn’t want to return to the life of a prostitute even if Empire Cleaning Services were to employ a woman so scarred by recent sickness. There wasn’t much income to make from other more legal occupations such as begging. Lindiwe dreaded that she would have to resort to theft or some other form of crime to survive.

“Can you sew?” Yewande asked.

“Sew?” wondered Lindiwe who was now well enough to sit on the same side of the room as her friends. “Are you offering me a job in the place where you work? Would they take me on?”

“I’m sure you could do the work as well as I can,” said Yewande. “It’s monotonous but it’s better than starvation. And although Union Republic Sportswear isn’t actually advertising at the moment they have plenty of vacancies.”

“Vacancies? Is business improving at the moment?”

“No,” said Yewande. “But you’re not the only one who’s contracted Buffalo Pox in the last few months. There are many sewing machines sitting idle at the factory at the moment and it’s unlikely that many of those who once used to operate them will ever be returning to work.”