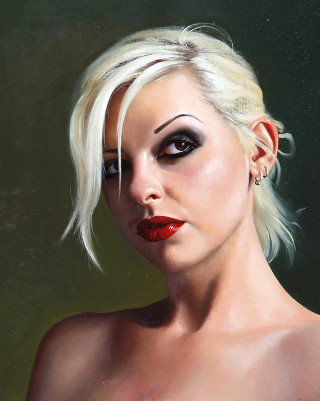 “And where did you say you worked?” she asked as she delicately squeezed Alex’s now limp but resolutely sticky penis between her red enamelled nails.

“It’s not quite the first date…er…” Alex began, but hesitated as he tried to remember the name of the naked woman sprawled on the mattress beside him. He couldn’t very well continue to call her Alfalfa2020 now their relationship had gone beyond cyberspace, but he’d already forgotten her real name.

“We’ve mostly only talked about sex and, if I recall, something to do with local traffic congestion, Alex.”

Shit! She’d remembered his name, but what was hers? Did it begin with ‘A’ or with some other letter?

“I think we also discussed some other global issues…like…er…”

“Like what?” she snorted. She stroked his testicles while Alex ineffectually twiddled his fingers through her hair. “And the name you’re trying to remember is Agnieszka. Not Agnes. Agnieszka.”

“Russian?” guessed Alex. It was at least plausible. She was quite a catch for an internet date and very much in a blonde, slim and tall fashion that would be wholly consistent with someone of Russian origin. And she had that delightfully dismissive hauteur Alex associated with Russian women…

“Polish,” she corrected him.

…Or, indeed, women from anywhere to the East of Germany.

“My parents came from Poland,” she continued. “Back in the Nineties. I’m sure we’d mentioned that on the net.”

“I think we talked about global warming, the environment and stuff like that,” said Alex who was intent on returning the conversation away from the poverty of his memory to the wealth of his political and social knowledge.

“I don’t remember any of that at all,” Agnieszka remarked. She teased his left testicle with the sharp edge of the red tip of her longest nail. “You did talk about how rubbish this town is. No facilities. No pub. Just a crappy Wal-Mart and a Dunkin Donuts.”

“Well, bully for Ashton Lovelock, New Town. What made you want to live here rather than back in Swindon? I think Swindon’s a great place. Plenty of shops. And the M4’s nearby.”

“Well, it would’ve been easier for us now if I was still renting a place there. Your apartment’s just a mile or so from where I used to live…”

“More a flat-share than an apartment. Property’s so fucking expensive.”

“It was work more than anything else. My company’s based in a Business Park just ten miles from Birmingham. That’s forty odd miles from here. Just over an hour’s commute on the motorway…”

“…And property’s not so expensive round here, at least not compared to Swindon.”

“And where did you say you worked?” Agnieszka asked again.

“Well, that’s why I’m sure we must have talked about serious shit, you know, like climate change and immigration policy and terrorism and politics and stuff,” pleaded Alex. “I work for an on-line news service. It’s part of the Disney-Reuters-News International media group. I help compile news for the news services.”

“The ones you have to pay for or the free ones?”

“Both. The BBC. The Telegraph. The Mail. And even Google News. They’re all customers of ours.”

Agnieszka’s face crumpled into an almost comical expression of sceptical dismissal. “It’s all lies, isn’t it? All the stuff that’s posted on the net. Everyone says it’s just propaganda. There’s no money in News now, so it’s mostly made up or recycled or planted or just showbiz trivia.”

Alex was genuinely shocked. “That is not true,” he spelt out slowly and precisely. “There’s an absolute separation between editorial and news content.”

“Even on a News International outlet?” Agnieszka sneered. “I’ve seen the crap on Fox News UK. I’m just glad my parents came from Poland and not the fucking Republic of Waziristan. All they go on about is Fortress Europe and cars that run on deep-ocean methane. Where’s the separation between fact and insular small-minded fantasy?”

Alex wasn’t sure he was so pleased now that he’d invited this woman into his house. The last thing you want to happen while naked and just after having made love for the last half-hour is to have to listen to someone disabuse you for what you do for a living.

“I just collate and edit the news,” Alex pleaded. “I don’t have anything to do with what News International or, for that matter, the BBC or Google do with the content. And I don’t think there are any lies out there. It’s just presentation and editorial.”

Agnieszka smiled. She obviously enjoyed Alex’s show of outrage. “And just what kind of news do you edit and collate then? Big issues like the environment, war and nuclear proliferation?”

Alex twisted his face into puppy-dog submission. “Entertainment,” he admitted.

“Well, there’s a lot of it. After all the net is bigger than all the other media put together. And look at the success of VR. Virtual Reality. That’s exploded like there’s no fucking tomorrow…”

“Yeah,” said Agnieszka, with a wry smile. She cupped Alex’s balls in her left hand while her right stroked the length of his powder-stained penis where the glans was slowly retreating into the shelter of his foreskin. “I’ll give you that. You certainly know how to use the controls on Hot Nights Interactive.”

She bent her face down so that her lips, as bright red as the varnish on her nails, could brush along Alex’s now steadily reawakening penis.

“I try to please…” said Alex as he leaned back in a gesture of surrender.

“It’s not fucking politics or fucking religion or fucking environment you’ve ever talked about as far as I recall,” said Agnieszka. She tugged Alex’s penis up against her cheek while smiling at him from the distance between his eyes and his groin. “It was mostly nothing but fucking.”

And fucking was precisely what Alex and she did for the next few hours in Alex’s modest terrace at the end of a typical suburban car-lined street: each vehicle proudly displaying both tax disc and parking permit. In the muffled background of the couple’s pants and gasps came the occasional roar of overhead planes or the growl of motor engines, but the predominant noise was the mechanical electronic thud emanating from Alex’s sound system that he had pre-programmed to activate on just such an occasion as the one currently happening.

Alex knew that all was right in the world. This was his second first date this week and he’d lost count of the number of times he’d had sex so far this year with the various women he met through Hot Nights Interactive, not to mention those through New Friends On-Line and Fun With No Commitments.

Was Agnieszka any different?

Well, she was a first class lover that was for sure, although Alex had already guessed that from the on-line sex they’d enjoyed together. The controls might have been in human hands, but the physical contact was exclusively supplied by inexpensive computer accessories.

Agnieszka was undeniably head and shoulders above the normal standard of woman Alex had picked up on the internet, though given the difficulties in making friends by other—if you like old-fashioned—means, on-line dates were nowadays of a somewhat better class than they might once have been.

And as Alex’s penis felt the gushing warmth of Agnieszka’s vagina gripping his burning stiffness, he knew, more than he’d ever known before, that this was an encounter which had to be repeated.