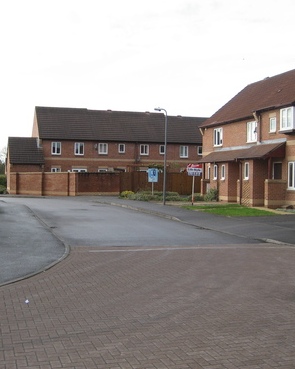 Almost every website in the world has a kind of About Me page and I can’t think of a good reason why my website should be any different. However, if you think this page will give an exposé of the real person behind the pseudonym, you’ll be disappointed. I won’t reveal even such personal details as my gender, age or nationality, although I don’t believe any of these things are much of a mystery to a perceptive reader.

The illustration above is of the real Bradley Stoke: an English suburban town distinguished, if at all, by being so very boring and unremarkable. But, of course, that might not remain so forever. Even the dullest places, from Hillsborough to Columbine, can become famous for all the wrong reasons. I chose the name simply because it sounds a bit like a real name and because not many people, even in the UK, have ever heard of the place.

I don’t know when I started writing fiction. It was probably as a child while at school, but nothing has survived nor deserved to. The earliest stories I wrote that can be found on my website are Omega and Alif. These were optimistically written for paper-based publication, but as there were no takers, they’re now available for free (like almost everything I’ve written).

When I wrote these stories the internet was nothing like what it is today and I didn’t write them with online viewing in mind, any more than with the Sex Fantasies I wrote at about the same time. These were written entirely for my own gratification and with no hope or expectation that they’d ever be read by anyone else. I was wrong, of course. These are now my most popular and most read fiction, despite being sometimes of questionable merit and not always on the right side of being decent and honourable.

I sort of mostly forgot about the fiction I’d written for several years until I became aware that the internet had evolved to the point that there were websites where I could post my fiction and where they might be read. Not too surprisingly, perhaps, most of those places were of a decidedly adult nature (even if much of the fiction was, and still is, remarkably juvenile).

So, at about the turn of the century, I began posting my fiction on various now mostly defunct websites of which now only Literotica remains. In fact, this website is one for which I have particular affection because Laurel, the website’s owner, took quite a shine to Innocence Lost and gave me a lot of encouragement at the time. It was also thanks to Laurel and Literotica that I chose to write short stories, which at first were exclusively written for the site. This was because I’d come to recognise that the bias on the internet, especially with regards to sex fiction, is towards the shorter form. Although I think much of the best stuff I’ve written include some of my short stories (such as The Price of Prejudice, Peace Returns and The Silent Tutsi), it’s still not the form in which I feel most comfortable writing.

However, in my early days of enthusiasm about the internet, I became active in a number of different ways. I contributed to several newsgroups, including alt.fiction.original and alt,sex.stories.d  (both now mere shadows of what they used to be); I started posting on Storiesonline and other story websites; and, most significant of all, I created my own website on asstr.org.

The pinnacle of this early period was when I began contributing stories to the now defunct Ruthie’s Club, a website that charged its readers and paid its writers (a very modest amount) for the stories it printed. From my perspective, what was best about contributing to the site was that my stories were properly edited and even illustrated. The zenith of the period in which I wrote fiction for the website was when my fiction was celebrated on 19 January 2004 by a Bradley Stoke Festival where several of my short stories were presented. It was also at Ruthie’s Club that I published my novella Degrees of Intimacy, which marks, if you like, the start of my mature style of writing.

However, my enthusiasm for writing fiction declined as the years went by. I stopped contributing to Ruthie’s Club (or anywhere else for that matter) and didn’t even notice when the site ceased to exist, which was long after the death of the eponymous Ruthie who edited so many of my stories.

I started writing fiction again in about 2011, which was when I wrote The Anomaly Trilogy, Glade and Ivory  and No Future, all of which are pretty long and are also, almost undoubtedly, the best fiction I’d yet written. These were published over a period of about three years, with the last chapter being submitted in 2014.

This was also the time that I started publishing my fiction in e-book format most notably on Smashwords, but also on Lulu.com and Amazon.  In my new burst of enthusiasm, I even started my own WordPress blog, as I’d got tired of posting on news boards where my views and opinions were swamped by trivia and spam or on Storiesonline’s blog, where most other blog posts are of mind-boggling self-regard.

Since publishing these three novels, I’ve posted a number of short stories that are no less varied than any I’ve ever written before and a fourth novel, Crystal Passion, which is the account of a British all-woman band touring America in the 1990s.

If you want to see what other people think about my fiction, then please read these independent unsolicited reviews.

My most recent story publication was on 16th May 2016 and is the novel Crystal Passion in e-book form.

My most recent blog entry was on 5th November 2020 and is a good place to find out even more about me.